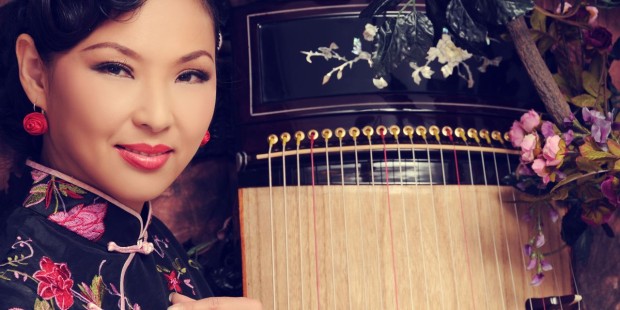 The exotic East immediately envelopes the audience when Jennifer Chang and her gu zheng, the 21-string Chinese zither, take the stage.

Jennifer studied traditional Chinese music and gu zheng performance with grand masters in China.  As a gu zheng soloist, she is in demand around the world as a teacher and performer.  In addition to solo appearances in Japan, Korea, Taiwan, and Hong Kong, she has performed as the soloist for the Emperor of Japan and for former President Bill Clinton.

Since moving to the U.S. in 2001, she has appeared as soloist with the Raleigh Civic Symphony and Chamber Orchestra premiering works such as “ Voices of Asia and the Pacific,” “Creatures – Scenes & Fairytales,” “Around the World,” and “China Dream – Tradition & Technology.”  During the 2007 season, Ms. Chang was featured as a soloist performing Chinese composer He Zhanhao’s Butterfly Lovers Concerto with the North Carolina Symphony under the baton of Grant Llewellyn.  Her performance was lauded as  “one of the season’s most enjoyable concerts” by Roy C. Dicks of the Raleigh News and Observer.

In 2007, Jennifer premiered the use of the gu zheng in western ballet in “Ballet Festival,” created by Robert Weiss, artistic director of the Carolina Ballet.

“Ms. Chang was undoubtedly the ideal winsome ambassador to ensure that such “foreign” and forbidding music would become friendly and accessible.” — Paul D. Williams CVNC

In 2011 with Orchestra New England, Jennifer and violinist Hsiao-mei Ku performed the word premiere of Mark Kuss’s “Sounds. Distant.” for violin and gu zheng concerto.  This project has a great impact in the music world and as it is a first work ever written for violin and gu zheng assisted by a western orchestra –The combination of instruments apparently has no active history.

In 2011, Jennifer began tenure as music director of the RTP Chinese Music Instrument Ensemble, and she has led command performances at Chinese New Year galas in the Triangle and Charlotte, an annual concert series at UNC,  etc.  She left the group in 2014 to found the Carolina Chinese Orchestra, serving as its Artistic Director and Conductor.

“Jennifer is an unusually gifted educator.   In school and community concerts she teaches using the Chinese language; she uses quick drawings on a white board, tells highly dramatic stories about wars and dragons and heroes that are then heard in her music – drawing her listeners in to the history and folklore of China, stimulating the listeners’ imagination, eliciting eager response from her audience.”

“I have worked with Jennifer Chang on a number of projects over the last few years and know her playing as a soloist in recital as well as in concerto with the North Carolina Symphony.  She displays an innate feel for her instrument and is a compelling performer in a wide variety of musical genres.  Hers is an exotic instrument and musical world to western educated ear and I can think of no better ambassador for the guzheng on our stages.  She has a wonderful stage presence and manner which invites the listener to engage and share in her rich musical culture which is increasingly available on the world stage.  I certainly plan to give her every opportunity in my sphere of influence and would encourage presenters, promoters and other orchestras to do the same.  The music world is indeed global today and our musical institutions can only be enriched by collaborating with artists like Jennifer Chang.  I wholeheartedly recommend her to you. ”